The National Collection at Kildare Village 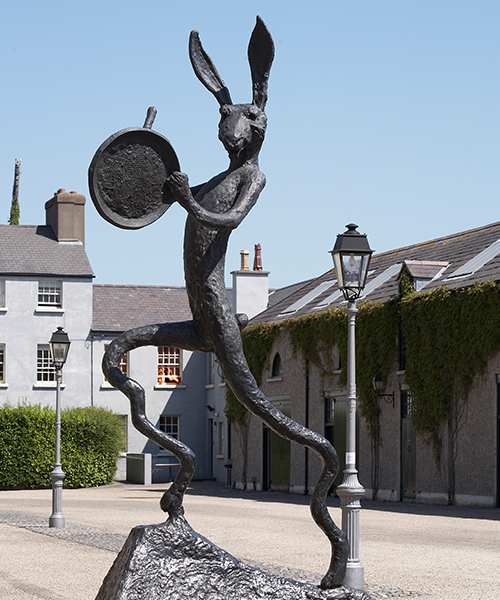 Born in Wales, Barry Flanagan studied at Birmingham College of Art and Crafts and then St Martin's School of Art, London. He lived and worked in Dublin and London. Flanagan was best known for his leaping and dancing bronze hares which were displayed worldwide. Flanagan represented Britain at the 1982 Venice Biennale. In 1991 he was elected to the Royal Academy and received an OBE. In 2006, in association with Dublin City Gallery The Hugh Lane, IMMA held a major retrospective of his work, which included ten large-scale bronzes installed along O'Connell Street and in Parnell Square.
While Flanagan has also made sculptures of other animals, such as elephants and horses, he is best known for his triumphant leaping and dancing hares. Flanagan's sculptures are by no means restricted by the use of this repeated motif; each hare being unique with its own dynamic gesture. Always celebratory and life-affirming, they dance, use technical equipment, engage in sports and, as we see here, play musical instruments.
The hands-on process of modelling in clay allows the artist to invest the work with a dynamic sense of movement. The piece is cast in bronze, but the marks made by the artist's hand are evident and as a result, the surface has a tactile quality. The work has a spontaneous feel, echoing the speed of drawing, the freedom of modelling in clay, and the curiosity and playfulness of the hare itself.

Dorothy Cross lives and works in Ireland. Many of Cross’ works incorporate items found on the shore, including boats and animal skins, while others reflect on the environment. During the 90s, the artist produced a series of works using cow udders, which drew on the animals’ rich store of symbolic associations across cultures to investigate the construction of sexuality and subjectivity. She has worked on several large-scale public projects, most memorably the award-winning Ghost Ship (1998). In recent years, her practice has focused on nature and the ocean, working with maligned animals such as jellyfish and shark, and exploring rarely accessible areas like sea caves or shell grottos.
She has participated in numerous international group shows including the 1993 Venice Biennale, the 1997 Istanbul Biennial, and the 1998 and 2002 Liverpool Biennial. She also took part in the ground-breaking 1994 exhibition Bad Girls in the ICA, London, and the CCA, Glasgow; the 1998 exhibition Mirror Images: Women, Surrealism and Self Representation, which was shown at MIT List Art Center, Boston; Museum of Contemporary Art, Miami; and the San Francisco MOMA. A major retrospective of Cross’s work was held at IMMA in 2005. 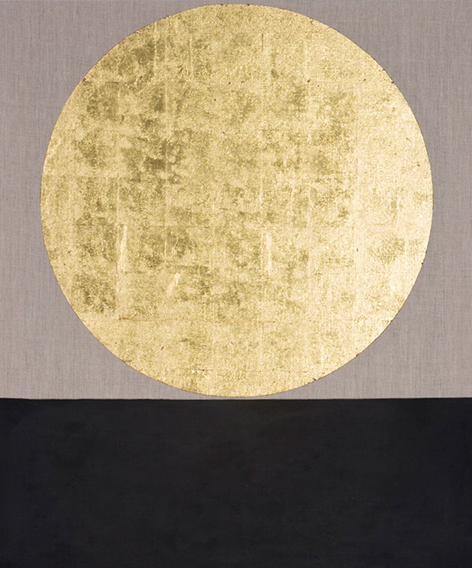 Patrick Scott (1921 – 2014) was born in Kilbrittain, Co Cork, and trained as an architect.studied architecture at University College Dublin. He went on to work with the architect Michael Scott and as a graphic designer with Signa Design Consultancy. Scott painted in his spare time and, while still a student, exhibited with the avant-garde White Stag Group. In 1960 he represented Ireland at the Venice Biennale. The same year he won a National Prize at the Guggenheim International Award and turned to painting full-time.
Scott is recognised as one of the first exponents of pure abstraction in Irish art and a significant contributor to the development of modernist design in Ireland. He was elected a Saoi of Aosdána in 2007. Retrospectives of his work were held at the Douglas Hyde Gallery (1982) and Dublin City Gallery The Hugh Lane (2002) and a seminal 2014 exhibition at IMMA in 2014 entitled ‘Patrick Scott: Image Space Light’ which brought together the most comprehensive representation of this remarkable artist’s 75 year long career.